To begin with, I have a wide range of interests, including experimental archaeology which provides a fusion between my environmental knowledge, interests in Palaeolithic and Mesolithic archaeology and my fascination in the Prehistoric use of organic materials.

A major recent project for me has been to work on the west coast of Scotland trying to establish how Mesolithic hunter-gatherers were living.  I did this by restricting myself to the natural resources and tool kit of a Mesolithic hunter-gatherer so that I could I go through similar thought processes and experiences. Using experimental archaeology and bushcraft skills to fill in some of the gaps in the archaeological record, the human facets that are often missing. Making and testing a wide range of fishing gear, travelling thousands of miles over 4 years and starting to feel like a Mesolithic hunter-gatherer; lugging fishing gear to remote sites, planning to maximise the use of tides, and often experiencing awful weather. 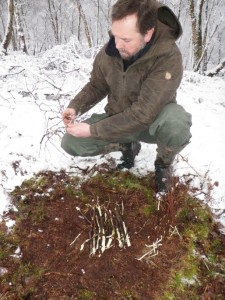 These experiences provided me with an insight into the world of the Prehistoric coastal hunter-gatherer, revealing the extent of organisation and knowledge that they must have had in order to fully utilise their environment. The planning needed to maximise returns, whether foraging, hunting or collecting natural resources.

Experimental archaeology is often used to engage public interest in our past, most notably through reconstruction or experiential learning. With a view to further communicating our understanding of the Mesolithic to a wider audience I recently wrote a novel; The Hunter, The Dog Men and the House by the Shore.

I had three objectives in mind.

Firstly, to illustrate what a fascinating and diverse ecosystem we have lost in the UK since the Mesolithic. With over 30 years’ experience in the environmental sector, I have long been aware of the relationship between human activities, however small, and their environmental consequences. The environmental and ecological knowledge required; the places to find the best materials for a particular task, knowledge of seasons and the seasonal movement of species. When and where to be, at a particular place at a particular time of year. My novel takes the reader on a journey through north-west England (what is now Merseyside, Cheshire and North Staffordshire), 8000 years ago, in a landscape where aurochs, elk, wolf, lynx and wild boar roam.

Secondly, to bring to the modern reader an insight into the daily lives of Mesolithic hunter-gatherers, the food they ate, how they might have cooked it, how they travelled, the tools, the buildings, the boats. The novel is based on the latest archaeological research and is packed full of natural history and bushcraft skills. The main character is a lone Prehistoric hunter who works his way through this diverse and changing landscape. On his travels he encounters a range of characters; from traders to killers and ultimately meets his new mate who lives in a house by the shore.

Thirdly, to demonstrate the extensive skills and knowledge that our ancestors would have employed day in, day out, skills that most people now lack. As an experimental archaeologist I use ancient technologies and bushcraft skills to understand how our ancestors used to live.  Some of my projects have included; stone and bone bead making in Romania, tree bast comparisons in Denmark, skin-on-frame boat building, and Neanderthal birch bark tar production. In short, a range of exciting and fascinating projects that have provided me with a genuine insight into the range of skills required by our Prehistoric ancestors.

It is of course very difficult to understand the mind-set of someone who lived 8000 years ago, but by using some of those ancient hunter-gatherer skills together with experimental archaeology, we can move some way toward them. 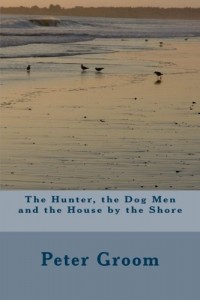 Peter Groom has a PhD in Mesolithic Archaeology, is a freelance experimental archaeologist and primitive skills/bushcraft practitioner, a founding member of the Mesolithic Resource Group and is the course manager and principal instructor of the Environmental Archaeology and Primitive Skills course at Reaseheath College. He lives in Staffordshire, England.

For the last few years, I have been working with colleagues Peter Groom and Grethe Moéll Pedersen on the procurement of tar without using pottery. If you, like me, work with Stone age cultures, some things are more spectacular than others, and in this post I am going to introduce you to one of those – pieces of birch bark tar that may be up to 250 000 years old.

250 000 years ago, someone made and used birch bark tar in Central and Southern Europe, well before modern humans entered European history. The people who hafted their flint implements with tar, were Neanderthals: sturdy humans with stocky limbs and big brains well adapted to the cold climate of Europe. Neanderthals are technically called Homo neanderthalensis, first recovered in Neanderthal, Germany. They did, however, live as far east as Georgia and as far west as the Iberian peninsula.

Neanderthals had a complex stone technology centering around Levallois flakes: large-ish flint flakes with two sharp edges, often made into spear points or used as base for other tools.To make a Levallois flake demands a level of skill in flint knapping which is currently beyond my level. You first have to elaborately shape a piece of flint to resemble a tortoise shell, before you strike off the Levallois flake with a well-aimed blow. Around 250 000 years ago, someone made one and hafted it with birch bark tar to form an unknown implement, maybe a spear. This is the earliest find of birch bark tar that has ever been made, found at Campitello quarry, Italy. In Germany, a similar find has been made at Königsaue, but dated to c. 50 000 years ago.The site Inden-Altdorf in Germany also yielded 81 artefacts with tar specks all over, from 120 000 years ago; a number that indicates an ability to produce tar repeatedly and when needed.

But what is the big deal with this tar? Although it may not seem particularly impressive today, there are two reasons for why Neanderthal tar making is special: The only other artefacts we have recovered after this enormous amount of time are made of stone, and tar provides an interesting variation to the discussion. But more importantly, to make tar is actually a complex process that demands a carefully controlled temperature between c. 250-400°C, airtight environments, and a good plan. The fact that Neanderthals were making tar shows a skillful mastery of fire, an understanding of the concept of airtight (and therefore the concept of air), and an ability to plan and monitor a demanding process. This all credits Neanderthals with quite the intelligence!

Many researchers have tried, and most have failed, to make birch bark tar the way Neanderthals did. To achieve tar, you must force birch bark to undergo slow pyrolysis, where bark changes from mass to liquid (tar), gas (volatile, smelly fumes) and waste matter (char). From 6-7000 years ago onwards, the airtight conditions could easily be created by pottery. But before this, we have as of yet found no evidence for how the tar was made. Remains from a bonfire at Abric Romani in Spain, dated up to c. 70 000 years ago, shows evidence of a hydrocarbon spill, but that is all. Many have been puzzled by this mystery of production.

Basically, we had made tar in small heaps of sand, and all that remained was a spill of hydrocarbons in bonfire remains. But it did take us 5 years to get there! Boy, are we impressed with Neanderthals: We barely made it to their everyday level of thought, and I have, for sure, learnt to never call them primitive again.

Tine Schenck is an experimental archaeologist with a special interest in Boreal, seasonal exploitation of resources, and one of the founders of ArchaeologistsEngage. You can read more about the first experiments here.